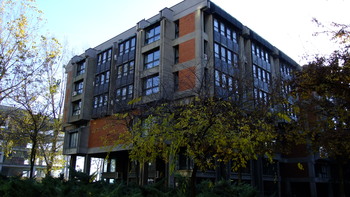 The History of the Faculty of Philosophy

The Faculty of Philosophy in Novi Sad was founded by a special law enacted by the Parliament of the People's Republic of Serbia in June 1954. Since the Faculty was part of the University of Belgrade, this implied assistance in staff and other means from the University of Belgrade, along with the first group of professors, comprising of the greats of the Serbian science and culture. Those were the beginnings which were experienced as the natural "growth" of the environment, and later a success, which has characterized its enviable rise in the past 50 years, as well as justified expectations.

The Faculty developed rapidly with planning, with the great enthusiasm of its employees and the all-round support of the community. The staff increased − in the beginning, by bringing to Novi Sad already established researchers or talented young people who began building their university career here. Later the Faculty started relying on its best students − graduate studies were opened in three study groups in the school year of 1961-1962, and the first two doctoral theses at the Faculty were defended in 1969. The library was soon founded for the needs of teaching and science, the development of scientific research work was thoughtfully encouraged. After the initiative of the Provincial government, in 1968 the Faculty was given the role of the founder of three independent scientific institutes − the Institute of Linguistics, the Institute of Hungarian Language Studies and the Institute of the History of Vojvodina. With a versatile composition and overly large structure (14 study groups), the Faculty of Philosophy split into two faculties in 1969 − Faculty of Philosophy and the Faculty of Sciences. The study group for pedagogy was opened in 1972 and the one for psychology in 1982.

The Faculty of Philosophy today

Today, the Faculty of Philosophy is a modern scientific-educational institution with 17 departments, more than 45 accredited study programmes on all three study levels. The Faculty has 14 centres, out of which we would like to single out the Centre for Serbian as a Foreign Language, where a large number of foreigners study Serbian. At the Centre for Languages, which is open for students and the general public, among other languages spoken in the world there are courses in Portuguese, Turkish and Persian. Chinese language and culture can be studied at the Confucius institute (established in 2014).

The central library has over 600,000 volumes, along with digital and electronic editions available on the website. There are around 6,000 students studying at the Faculty, with 400 members of teaching and administrative staff.

Traditionally, the Faculty cooperates with all important scientific and educational institutions in the region, and it is also cooperates with Austria, Italy, France, Spain, Germany, Russia, Poland, the Czech Republic, the Netherlands, Portugal, Turkey, Great Britain, Belgium and the United States, Mexico, Thailand, and South Korea. The Faculty signed many agreements which are the basis for cooperation − from student exchange, teaching and non-teaching staff, exchange of publications, complementary scientific conferences, participation in doctoral dissertation defence boards, cooperation on scientific projects, and cultural events. It should be stressed that the Faculty is one of the 500 institutions in the entire world which has a Confucius Institute. The staff working at the Faculty is active in international projects focusing on the area the modernisation and internationalisation of higher education.